I've really enjoyed the hyper-retro revivals of classic arcade games that have come out on consoles this generation; Pac-Man CE, Spelunker HD, Galaga Legions, Space Invaders Infinity Gene, all of these games are golden. With this new Frogger title, Konami tries their hand at this trend.


• Classic Frogger, a port of the classic "hop a frog across logs and between cars" game.
• Twin Frogger, a twist on the classic gameplay in which the player controls two frogs with one controller input. On harder levels, this really broke my brain.
• Paint, in which players must move their frog across specific tiles in order to color in a picture.
• Lady Frog Rescue, a multiplayer mode where you compete to find girlfriends but only find frogs.
• Battle Royale, another multiplayer mode in which you become KING FROG (by finding a girlfriend) and then stepping on your opponents.
• Tile Capture, the final and most interesting multiplayer mode. Each time you move your frog, you change the color of the base tiles you're hopping across. Any player can reverse these changes while you're actively hopping, but once you reach your home base those tiles are locked in temporarily. Whoever has the most tiles when the round ends wins. The other multiplayer modes are kind of poor, but this one's solid. 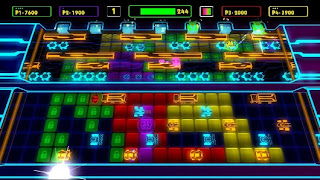 In addition to these modes, there are also 20 challenge missions that get quite hard if you're not a Frogger pro (I'm certainly not, I can only complete about half of them) and a mode called Frogger Freak Out, in which you play each game type for a few seconds to a minute a piece. Think of a Wario Ware type game where everything is Frogger based.

Like Pac-Man CE, Frogger HAE offers several visual styles to choose from, including an 8-Bit style, a flashy "Next Gen" style that looks awful and somehow causes the system to lag, Hyper, a style that most closely resembles Pac-Man CE, and skins based on DDR, Castlevania, and Contra. The Contra one is fantastic, the DDR one is bland, and the Castlevania one is honestly kind of ugly. Strangely, there's no way to play the game using the original arcade graphics. The music is mostly Frogger themed remixes, with the bizarre vocal song Froggy's Lament being the best/cheesiest. It's a cover of this song, whose very existence bamboozles me:


Frogger HAE is a fun game if you enjoy the original at all. I'm not a huge fan of the original Frogger, but I enjoyed this one, even if my enjoyment didn't last as long as the other hyper-retro games listed earlier. It's a shame the multiplayer modes aren't playable online, and it's hugely unfortunate that you can't play the classic game type in multiplayer. The game is available on all three consoles right now, so everyone can get a shot at helping Frog hop to the top. As it turns out, Frogger's a lot more entertaining when you're avoiding 80's musclemen than when you're avoiding cars. 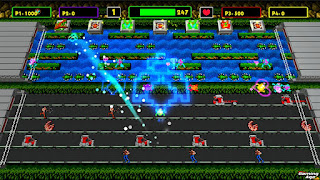