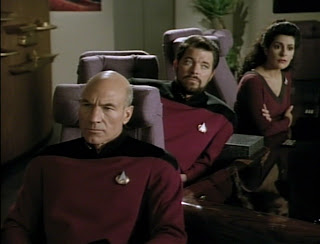 "Deanna loses her empathic powers; the Enterprise is slowly pulled off course by an unknown force existing in two-dimensional form."

The Enterprise is mysteriously being pulled through space towards a Deadly Cosmic String by an unknown force. As this is happening, Troi begins experiencing sharp pains followed by a total loss of her empathic abilities. She doesn't take kindly towards people trying to comfort her and mocks them for "offering a hand to the blind woman." There's a joke in the episode about how medical personnel are the worst patients to treat, but that doesn't really improve the fact that Troi's pretty unbearable here.

This episode feels like the inspiration for DS9's Melora, only not nearly as bad. It's not a great episode, but having seen Melora, I know it could have been way, way worse. Both episodes focus on a character with a disability who gets angry when people are nice to her, even if they're not trying to help compensate for her disability. Some times friends are just acting like friends!

Troi's powers are lost during this episode because of the force pulling the Enterprise, which turns out to be a swarm of two-dimensional plankton or something. No amount of engine power can cause the ship to break free of their sticky grasp until the very end when the creatures are tricked into looking in another direction for a second. The "Look over there!" trick saves the day, courtesy of Troi's planning. She succeeds after being brought in to ponder a scientific question that she would normally never be asked, I guess because they wanted to prove she was still good at something, since she stops being a decent counselor once she can no longer read minds. She gets her powers back as soon as the ship is free.

Season 2's Loud as a Whisper, dealing with deafness, does a much better job showing someone coming to terms with a disability. Geordi, throughout almost the entire series, does a decent job showing someone with a disability living with it and not thinking of himself as disabled. The Loss (and Melora) retread familiar ground, but do so with less tact and worse acting. It's a good topic to explore, but you don't revisit the same story twice and do it worse the second time. TNG does this a few times. Voyager almost exclusively does this.

As an aside, it's pretty silly that no one realizes the 2D creatures are out there until they accidentally look at a scan that shows the Enterprise at a slight angle. You're traveling through three-dimensional space, you'd think the ship would have tilted at least a fraction of a degree once prior to encountering these dudes. 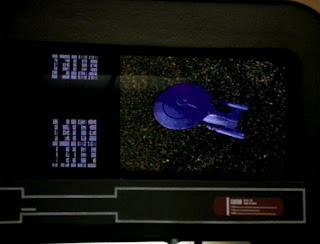