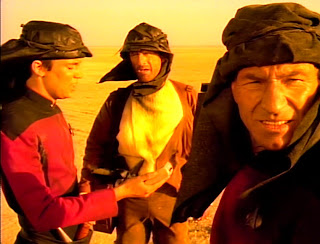 "On his way to Starfleet Academy, Wesley Crusher must care for an injured Captain Picard after their shuttle crashes on a desert moon. "

After several "Is he really leaving?" tease episodes, Wesley Crusher finally leaves for the Academy. It's a good episode to go out on, too. Picard is on his way to negotiate some nonsense and Wesley accompanies him as his last mission as an Enterprise crewman. For some reason that's totally unclear, they're flown to the planet by a scruffy space grouch instead of taking one of their own shuttles. Because of this poor decision, the shuttle, of course, crashes before reaching its destination.

The plot requires you to ignore this egregiously dumb decision, but aside from that, the episode's quite good. Picard, Wesley, and Space Grouch struggle through a desert, find a cave with water, and get hassled by a water ghost. I don't know why any civilization would put a water fountain in the middle of a desert and then haunt it, but I assume it's just a way to mock unfortunate space travelers. They probably watched the whole thing on their space TVs and laughed.

Space Grouch dies because he's hotheaded and doesn't care about science. Picard gets hit by rocks and seriously injured because he's a self-sacrificing hero. Wesley saves the day because he always does, but at least the solution is something that feels like a Starfleet solution and not Wesley Space Magic. Wil Wheaton does a good job here, and it's a good sendoff (for now) for his character. Patrick Stewart also does a fantastic job as he lays dying/delusional, and really makes the situation look painful. He's saved in the end of course, but it's still pretty rough to watch. Dude's been through some horrible things this season.

If Wesley had been written throughout the rest of the series as he was in this episode, I think fan reception to his character would have been a lot nicer. More episodes like this, and fewer where he and The Traveler save the universe, and you would have had a very different character.

Special programming note: This episode features the worst alien design on Next Gen. 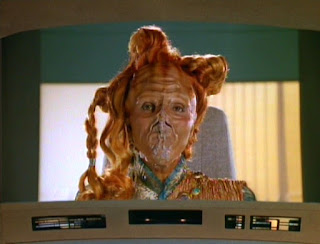