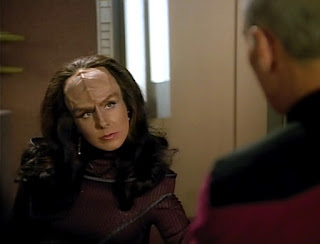 "Captain Picard is selected to arbitrate the selection of a new Chancellor for the Klingon Empire and, in doing so, find out who dishonorably murdered the old Chancellor. Also involved is Ambassador K'Ehleyr, who has a surprise for Worf: their son."

Now this is a good episode. K'ehleyr returns and shows Worf their son for the first time, Picard is chosen to oversee the succession of the Klingon empire, and Worf gets to go nuts. Reunion is one of the best Klingon episode of Next Gen, and it's amazing that such a good episode follows one as stupid as Legacy. The only things these two episodes have in common are their terrible, one word, nondescript titles that I'd never remember without looking them up. "Reunion" is a title that could describe dozens of episodes of Trek. "Legacy" could describe hundreds.

I really think the actress who plays K'ehleyr (Suzie Plakson) does fantastic work here. She does a great job portraying someone who really does come off as half Klingon, half human, and her character is much more compelling than Voyager's similarly conceived B'elanna Torres. She only gets two episodes, and that's a real shame, because we lose both an interesting character and an impressive actress (her portrayal of Dr. Selar in The Schizoid Man is also good.) I'd have loved to see her remain a recurring guest, but that's pretty hard to do with the way this episode ends. Surprisingly (or not) Plakson is completely unlikable when she returns to Trek years later to play Female Q on Voyager.

This episode continues to develop Worf as a character, and it's one of his most significant shows (and also the first of many that show him being a pretty bad father). I feel that he has the best character arc of anyone on Next Gen, and that carries on to DS9 quite well. If you ignore how dumb he is in season 1 and large parts of season 2, Worf really is a great character, even if he is a bad dad and kind of a bad security officer. The dude changes, while some other characters (Riker) actively resist change.

Picard being forced to arbitrate the succession of the Klingon Empire while simultaneously trying to determine who murdered the previous Supreme Chancellor makes for some fun drama. It's kind of obvious from the start that it's going to be Duras, since he was already established as a sleazebag in Sins of the Father. It would have been more interesting if Gowron had been the murderer but Picard was forced to elevate him to the seat of Chancellor anyway after Worf takes Duras to town. 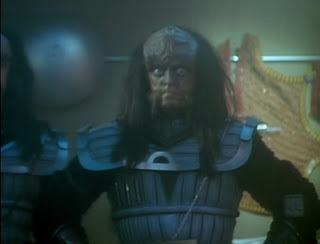 This is Gowron's first appearance, and I think it's safe to say that Robert O'Reilly plays him up in a hammier manner than possibly any character in Trek. He chews scenery harder than even Shatner, and I love him for it. It's bizarre, theatrical, ridiculous, and hilarious, and I can't imagine the character any other way. When most Klingons are either somber warriors or angry thugs, it's kind of refreshing to see their newly chosen leader be some kind of mad clown. This guy's eyes are humongous, and that's one of the big reasons Gowron ends up looking insane at all times. He's a special kind of calculated crazy, and he's one of my favorite Klingon characters.
Posted by surlaw at 10:51 PM