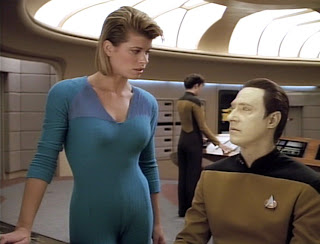 "The survivors from a doomed freighter crash-land on Turkana IV, Tasha Yar's homeworld, and are taken hostage by a dissident faction. When the Enterprise moves to intervene, they are joined by Tasha's sister Ishara who has ulterior motives. "
The Enterprise is looking for some missing Starfleet Dudes and tracks their distress call to the planet that Tasha Yar was raised on, the one that she was sure to remind us was full of Rape Gangs throughout the show's first season.

Before I even get to the content of the episode itself; This place is a Federation colony, populated entirely by humans. It "cut ties" with the Federation at some point, and became Planet Rape. How exactly are we as viewers supposed to believe this? At this point in the show, the Federation is mostly a utopia with a couple of obnoxious admirals. Everything else is pretty good. There's currently no war, Earth's perfect, and everyone is free to chill. Starfleet intervenes when aliens send calls for help. So, why, how, are we to believe that a Federation colony with a relatively small population is allowed to function as a place where the most common trait worth discussing is how much rape happens there? There was no big disaster that made the people here into monsters, they just decided to up and cut their ties to civilization one day, and the Federation is cool with that.

The very idea that this colony would be allowed to do what it likes is ridiculous in the established universe of the show. This isn't a Prime Directive issue; this is a Federation colony where everyone rapes each other every day and everyone not raping is either killing of living in constant fear. What exactly is the reason Starfleet doesn't evacuate the innocent and burn down the rest of the colony? It's a stupid premise that doesn't fit internal logic and makes the Federation's later complaints about the Maquis even dumber. Starfleet will commit atrocities to put down a splinter group of Federation members who want to fight the Cardassians, but they'll turn a blind eye to Planet Rape? Seriously?

I don't even want to write about this episode because this whole set up is so stupid. If you want to establish a lawless world, at least give SOME back story about the Federation trying to help it. This episode insults the viewer, the characters, and decency. It's among the dumbest things Next Generation ever does, and yes I'm including the episode where Barclay turns into Spider-Man.

The actual episode's story involves going to the planet, seeing it slightly less rapey than it used to be, and inadvertently helping one group of thugs mess things up for another group of thugs. Tasha Yar's sister appears, wearing the same kind of embarrassing suit Seven of Nine ends up in on Voyager and wearing a fantastic 80's hairdo. Her hair's the best part of the episode. To no surprise, she betrays the crew, Data tells us he has no emotions even though he really is reacting emotionally her, the Enterprise leaves, and everything's back to status quo. It's a bad episode and by far the worst of season 4. 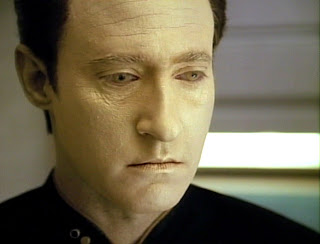