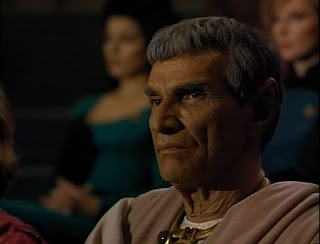 "Violent emotions sweep the Enterprise when Ambassador Sarek comes aboard to finish a long diplomatic mission."

Spock's dad appears, in one of the few crossovers between the Original Series and Next Gen. This is also by far the best crossover. The plot, involving the Federation negotiating some treaty with some aliens, is mostly kept in the background and the emotional core of the story is allowed to take center stage.

Mark Lenard does a phenomenal job here as a version of Sarek that has aged significantly since we last saw him in the Original Series movies.The core of the episode is the conflict caused by the ravages of old age. It's Star Trek examining an entirely human issue, rather than technobabbling through an Alien of the Week. This is what makes Trek great to me. This is what I'm watching it for.

The emotional turmoil within Sarek projects telepathically into the rest of the crew, causing violent outbursts. This is the weakest part of the episode, but it's certainly not bad. The same premise is used again on DS9 in the episode where Troi's mom's going through menopause or whatever. 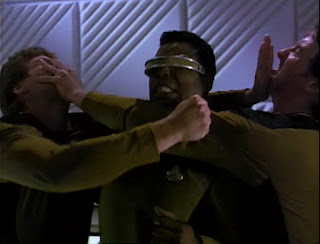 Sarek uses a mind meld with Picard to regain his emotional control. Patrick Steward does a great job here too, and the director did an awesome job making him looked aged though lighting rather than using makeup or something else cheesy. This episode shows the Vulcan Mind Meld as an absolutely brutal thing to endure, one that permanently changes a person. It's a deep shame that it's thrown around so casually in other parts of Trek, especially Voyager.
Posted by surlaw at 11:48 PM