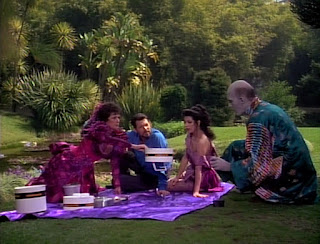 There are three plots in this one; A Ferengi falls in love with Lwaxanna and tries to steal her, the Enterprise is charting a nebula or something, and Wesley is trying to avoid going away for an Academy exam.
The Lwaxanna plot gets the majority of screen time, which is good since the nebula charting, as brief as it is, is exceedingly boring, and Wesley's dilemma over leaving to take what's basically the final step of his college entrance exam is obnoxious. For shirking his duties and avoiding the exam, Picard promotes him to a full Ensign rank.

The main plot involves a Ferengi captain falling for Lwaxana at some ceremony and trying to seduce her. When this fails, he steals her from Betazed as she's in the process of interrupting Riker and Deanna's romantic date. Both Troi women are wearing horrible prom dresses at the time.

While aboard the Ferengi ship, the women have their clothes beamed off by Ethan Phillips years before he would later be cast as Neelix on Voyager. After they get redressed in some kind of wrapping paper, Lawaxana gives Chief Ferengi an ear rub and then Neelix tries to disect her brain. Picard saves the day by reciting Shakespeare in the most bombastic way possible.

This is a pretty dumb episode, but it is entertaining. Deanna is way too big of a baby over the way her mom treats her, and her dialogue would suit her better if she were a high schooler. Meanwhile, Wesley, the actual high schooler, is the wisest and most adept member of the crew once again, deciphering a message sent from Riker to the Enterprise that Worf, Data, and Geordi can't understand.

I get that the things the Ferengi do on this series are super sleazy, but it still bothers me that Federation characters treat them with such utter and open disgust. You're supposed to sympathize with Lawaxana from the beginning, and you do once things go bad, but it's really hard for me to see past her flagrant racism when she first meets the Ferengi at the ceremony. Picard and Riker aren't quite as bad about it, but it's still really unbecoming for a people that call themselves an Enlightened Society. The episode opens with the characters showing their contempt for an entire race so that once the Ferengi DO do something awful and kidnap our three heroes they can smugly say, "See? We were right about these disgusting trolls. Rotten to the core."

I think there's a lot to be said about the Ferengi on TNG, both as uncomfortable caricatures and as whipping boys for our heroes, and I'm really glad that DS9 handles them in a far better way, allowing them to be actual characters. DS9 also makes Lawaxana Troi more likable, but that's material for another review. 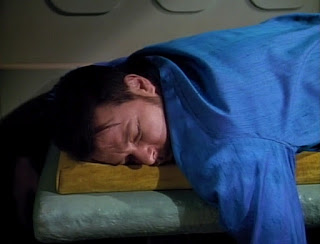