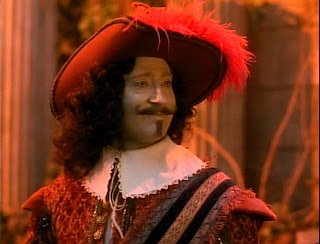 "Lieutenant Barclay, an introverted diagnostic engineer, is having difficulties dealing with his fantasies."

This is Barclay's premier episode. We get to see him swaggering around in his video game, fencing with fantastically silly 17th century versions of Picard, Data, Geordi, and a tiny version of Riker. Dwight Schultz really does a great job here, with his boisterous posturing in the holodeck and his meekness in the real world.

The episode really paints Riker as a miserable killjoy with no respect for the lower ranks. I thought he was supposed to be the party animal of the ship?

I really like Barclay as an anxiety ridden wreck who eventually overcomes his issues. He works well as a True Nerd in Space; not everyone would be able to perfectly adapt to a society like the Federation. Dude just wants to play his video games, kiss his virtual babes, and fence against small men. But yeah, it's creepy that his fantasy holopeople are based on his crewmates.

It's good that Geordi starts to warm up to Barclay by the end, since he too is a pretty goony guy. And, as brought up in the episode, he also knows what it's like to get a case of hololust.

Later on, in Voyager, Barclay is revisited, only in addition to being nervous and liking the holodeck he's also one of the most brilliant men in Starfleet. It kind of ruins his whole everyman setup. I know that this kind of starts on Next Gen, but it gets really bad in Voyager. 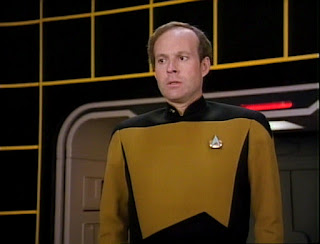