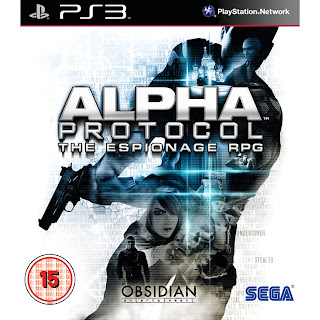 Developed by Obsidian and published by Sega in the summer of 2010, Alpha Protocol is ambitious, flawed, and captivating. The game went largely unnoticed at release, probably as a result of Sega not properly promoting it. I hadn't even heard of it until I found a copy of the PS3 version for $10 less than six months after release. PC copies go for even less; this game regularly shows up for $2 on Steam. There aren't many games where I say this, but I kind of wish I'd paid more for it. Alpha Protocol was my biggest surprise of 2010, and it remains one of the most engaging games I've played in years.

The story focuses on Michael Thorton, an agent of the secret organization Alpha Protocol who ends up being cut loose and needs to fend for himself in the midst of global conspiracies and double crosses. It's not the most original premise, but its dialogue is solid and the amount of choice the player gets in shaping that dialogue is what makes it special. More on that in a bit.

Alpha Protocol is a stealth-based action game with character building RPG elements. You gain levels as you complete missions, allowing you to buy new abilities in a variety of fields. I usually focus on Stealth and Martial Arts with a third focus varying depending on how I feel like playing. If you try playing this game as a pure shooter, you're not going to have much fun. Its shooting mechanics are mediocre at best. There are a lot of weapons, but not a lot of variety between them. Aside from pistols, most weapon focused skills are kind of useless. The game is clearly meant to be played as a sneaking game, in which you walk up behind unsuspecting bad guys and punch them in the neck. 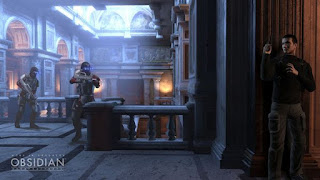 Once I figured out that your starting body armor is too loud to sneak up on everyone and dumped it for street clothes I had a lot of fun with the sneaking aspects of this game. If you play pure stealth, it becomes pretty simple, but it's satisfying. Peppered throughout the missions are minigames such as lock picking and password hacking. I actually enjoyed all of the minigames on normal difficulty, but on hard mode they become intolerable. You can learn skills to lower the difficulty of these games, which I strongly suggest doing if you play hard mode.

All of this is secondary to the heart of the game; its intricate, immensely entertaining dialogue system. There are a ton of dialogue prompts throughout this game, and rather than having binary good/evil choices like so many other games today, you have three to five options per situation (two being class dependent); Suave, aggressive, professional, veteran, and rookie. You don't know exactly what Thorton's going to say, as you choose his mood rather than his actual dialogue.

Each response style has its use throughout the game, and each can change the way other characters see you in major ways. If you spend the whole game being professional but then try to egg a certain antagonist on by being suave with him, he'll see through the fact that you're just trying to piss him off by joking around. If you play your cards right, you can turn almost every enemy in the game into an ally by the end, resulting in some very different endings. The overall premise and plot cannot be changed; you're just one guy in a world that's much, much bigger than you. There are only a few major events that can be changed, but even the same events will read completely differently depending on how you speak and how other characters perceive you.

I appreciate that you can play through the entire game without killing a single enemy, including bosses and major villains. These characters may end up playing additional roles in your story if you let them live, and the results of all of your actions will be seen in a newsreel that plays over the game's credits. Some decisions that seem good at the time may end up coming back to bite you in the end.

The true motivations behind everything are slowly revealed to varying degrees based on how you play. You can complete a playthrough of the game and be left largely in the dark about why things happened if you're the kind of player who shoots first and doesn't ask questions. There are a variety of characters who can serve as your handlers, communicating via radio. The dialogue you maintain with these characters shifts their opinions of you up or down, and both positive and negative reputations with your handlers have their own benefit. There are really no absolutely wrong choices you can make, a message that the game makes very clear in its initial briefing session.

This is a game I'd recommend on the strength of its story alone, in spite of any gameplay shortcomings. There aren't many games where I'll say that; the Silent Hill series is probably my only other big exception (other people might point to Nier as another example, but I actually really liked Nier's gameplay). I enjoy Alpha Protocol's gameplay, but I really can't say that it's good as an action game. Somehow, that doesn't really matter much to me here.

There are a few little non-combat related nitpicks I have with the game. There's a bug in which your character is accused of killing Marines if you enter an embassy through the wrong entrance, even if you never interact with them (when you play the embassy mission: DON'T use the roof entrance). Some character plots feel incomplete (I really wanted to see more with Sis and Albatross). The romance scenes feel completely needless, as usual, but at least their writing is better than you usually see. The first quarter of the game doesn't contain nearly the amount of choice the rest of it does. Little things feel unpolished, but overall, there's so much depth to this game that I can overlook these things. I usually don't replay story driven games more than once, but I've gone through this one four times and have seen significantly different personalities from its characters each time. The fact that it's only something like ten hours long helps, too. Every scene matters.

Alpha Protocol definitely gets my endorsement. It's such a unique experience that I feel anyone interested in story driven gameplay should give it a shot, as long as they can tolerate the mediocre action in the missions. It's easy to find a copy very cheap, especially if you have a PC that can run it (though I can't imagine how awful the minigames would be on a keyboard and mouse). On top of all that, it has a boss fight against an 80's guy in an arcade/disco while 80's rock blasts. What more could you ask for?

Also, unlike Obsidian's next title, Fallout: New Vegas, this game won't cause your PS3 to stutter and freeze after you've played it long enough. That's always good.
Posted by surlaw at 6:18 PM