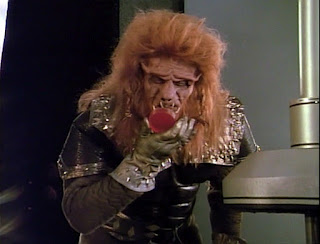 "Captain Picard and three other people are abducted and imprisoned by an unknown force and replaced by duplicates."


This episode is split into two plots: Real Picard trying to solve the puzzle of the room he's trapped in and Fake Picard strutting around on the Enterprise. Both plots are good; the puzzling in the room and the interactions with the other prisoners are good (even if the Pig Man Alien is a stupid design) and Fake Picard is pretty funny. I like that once Picard has figured out the game he just calls it quits and tells the captors that they're jerks. He doesn't bother to tell them that they have terrible fashion, but that's true too

Fake Picard funks from room to room being a jerk. He macs on Dr. Crusher, weirds out Troi, and lays some smackdown on Riker. He also sings drunken pub songs. Worf looks pretty excited when singing begins, but then looks suspicious. I wish Fake Picard had spent some time causing trouble with Data, but their interactions are pretty minimal.

In this episode, we have Jerk Mode Picard, a cute Bolian (with hair!), edible soap, and a Klingon with a pig's head as a new alien race. All in all a good episode. 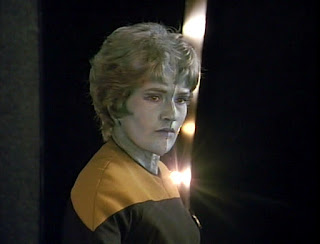