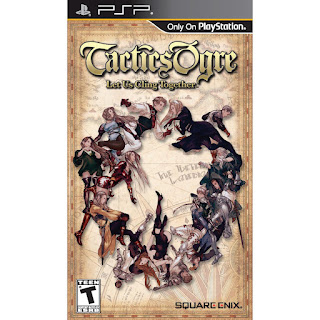 Tactics Ogre is an early strategy RPG originally released on the Super Nintendo in Japan in 1995 before being ported to the Sega Saturn and the original Playstation. It's considered one of the finest examples of the genre, though it wasn't the first popular strategy RPG title (Shining Force on the Genesis beat it by three years). In 2011, most of the original team got back together to develop a remake for the PSP. While I'll touch on the basics of both versions, in this review I'm primarily interested in reviewing the new content in the remake.

Like its more well known follow-up Final Fantasy Tactics, Tactics Ogre is a turn-based strategy game in which the player develops the skills and fighting styles of a large army of units and moves them around on a grid to defeat enemy units. Weapons and abilities vary widely by character class, and the winning conditions for most battles are either eliminating all enemies or eliminating an enemy leader. You control up to 12 units per battle, but your overall army will be much larger by the end.

The story focuses on very real, human themes early on; civil war, ethnic strife, greed, and abuse of power. Since it's still an RPG, it, of course, ends with demons and dark powers and monsters being resurrected. The human element is still there, but it starts to be pushed aside for the far less interesting magical elements.

What makes the story of Tactics Ogre work so well is the unusual amount of choice the player can make. While the ability to shape a story is more common in Western RPGs, it's almost unheard of in Japanese ones, and the choices you get to make in Tactics Ogre massively shift the story, your potential allies, and your ending. There's plenty here that makes the game worth playing multiple times, as long as you can tolerate the incredibly long, repetitive final dungeon that makes you fight essentially the same battle ten times.

So, that's the basics. The question now is whether it's more worthwhile to play the remake or to seek out a copy of the original.

Price wise, it's not much of a question. The PSP remake now retails for $20 new, while a used copy of the PS1 version will run you anywhere from $60-100. There are currently no plans to release a digital version of the PS1 edition, so if you want the original, it's a big investment.

The music and graphics look great in the new version. The old sprites are still here, but being able to see a wider swath of the battlefield and the new ability to rotate the camera in battle is nice. The graphics are primitive compared to the rich animation seen in Final Fantasy Tactics, but they're effective. Some of the new character portraits look worse than the original's, but the rest looks good.

The game's dialogue, unfortunately, takes a hit in the remake. The script is entirely rewritten and is now written to sound all Olde Englishy, and as is often the case, the result is stilted dialogue that flows poorly. The original dialogue isn't brilliantly written, but it serves its story well enough. The new dialogue sounds more suited to bad actors at a Renaissance Fair. Video game writing is often low quality, but in general, it's far better now than in 1995. Tactics Ogre's somehow manages to be worse.

Another oddity to the script is the changes to how names are spelled. The hero Denim is now Denam, his sister Kachua is now Catiua, and his rival/buddy (depending on your choices) Vice is now Vyce. Not really a big deal, but it seems like a completely unnecessary change.

So in this remake, you have a story that's harder to follow because of badly written, overly flowery old English prose, a font that's harder to read, and a bunch of pointless name changes. How did the new gameplay additions fare?

A major complaint about the original game was how long it took to level up your soldiers. Players would spend hours in Training mode having their guys punch each other off of cliffs to boost experience. Square realized this was no fun, so they totally overhauled the experience system. Now, after battle, everyone receives an equal amount of experience points, and levels are divided not by character, but by class. All Knights will be the same level, and if you switch a guy to a Wizard, he'll automatically level up/down to whatever your other Wizards are.

You can still earn new skills specific to units, usually based on their experience with specific weapons, and can assign different magic skills to units of the same class. However, leveling spells and weapons takes an enormous amount of time, and leveling all of your classes at once kills a lot of individuality of a character. It also makes new classes you earn late in the game effectively useless if you're not willing to spend hours and hours grinding battles while the newly level 1 class characters hide in the back of the stage doing nothing. 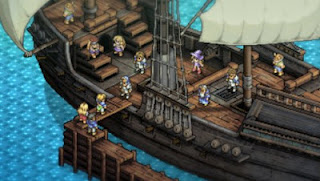 The original experience system was bad. The new one is way, way worse. Square should have looked at how perfectly level and skills grow in Final Fantasy Tactics and tried to integrate some of that system instead.

A big problem with using low level classes is that equipment is restricted by level. This is extremely frustrating and nonsensical, and it causes new classes to fall behind the rest of the party severely unless you're really dedicated. On top of that, the equipment system is miserable. The menus in this game feel clunkier than the original's, and there's no excuse for this in 2011. To get stronger weapons, you need to forge them in a very uninteresting alchemy system, where you'll spend hours clicking on menu items to convert them into the materials you need until you finally have enough to forge the weapon you want. Stronger weapons have a percentage of failure when trying to make them, so in order to succeed you're going to be saving and reloading your game a lot. This is pointlessly tedious, since there's no skill involved. It's entirely a dice roll where if you fail, you either spend a few minutes reloading or fifteen minutes re-alchemizing your items.


The major additions I do like involve the Chariot system. This is a new option that allows the player to rewind a battle, up to 50 previous moves. While this may cut down the game's difficulty, it allows you to try crazier strategies, take bigger risks, and seek out alternate ways of survive. And, honestly, even with this option, the game's still harder than Final Fantasy Tactics, Disgaea, or most other known strategy RPGs. You can also, after finishing the game, reload the story to any point in which it branches, so that you can experience the alternate storylines without playing through large portions of the game that will be otherwise unchanged. This game's New Game+ features are very well handled.

There are several new side story missions, which brought up a major sour note for me. There are invisible variables in the game that track the nation that random enemies you defeat are from. Defeating too many lowers your reputation with that group, and if it's too low, certain plot lines will fail. I spent a long time fighting through a series of fun, challenging battles, only to get to the very end of this sidequest and have it just totally stop, with no resolution. I looked online to figure out what to do next, and was told I was out of luck. Because of this invisible variable that the game never once mentions, I can't fight the final battle of this sidequest. Aside from this being obviously stupid, there's no way to even know the nationality of an enemy without spending way too much time looking at status menus in every fight and planning out who will attack who accordingly. This might be fun if you're incredibly obsessed with min/maxing every stat in an RPG, but to normal players, it's a terrible system.

The new script, the new equipment system, and the new method for raising levels all combine to make this game feel a lot less enjoyable to me than the original. 16 years later, there's no excuse for a remake to feel clunkier than its original form. If you have no other option, Tactics Ogre PSP is still a fun game, but I would absolutely not recommend it over the PS1 release. A lot of reviewers called the PSP release the definitive version of the game; I don't believe they actually played the whole thing before making this claim. I certainly had a much higher opinion of it in the first five hours than I did by the end.
Posted by surlaw at 11:50 AM