Ever find yourself wondering what happened to the cast of Final Fantasy IV seventeen years after Cecil and company saved the world? No? Me either. FFIV ends cleanly, with every plot line resolved and loose ends tied up. So, what better game to make a direct sequel to than that!

Released episodically on Wiiware and Japanese mobile phones, The After Years robs players by selling nine episodes of one to two hours of playtime for $3-$8 each. You know the bad part of RPGs, where you're weak, have no abilities, fight enemies that can barely stand up to one hit, and need to waste time buying starter equipment and basic healing potions? Hope you like doing that nine times. The whole package costs something like $34 when all's said and done, though mercifully, Square released it in its entirety for PSP owners as part of the Final Fantasy IV Complete Collection. They also redid the graphics so that the text and menus no longer look like a cheap RPG Maker game.

So, for $30 (less now) PSP owners could buy a very nice overhaul of the original Final Fantasy IV, the utterly pointless FFIV: Interlude (an hour long game that forces you to play through the Sealed Cave from the original game and almost nothing else), and the disaster that is FFIV: The After Years in one convenient package. The version of classic FFIV included in this package is top notch and well worth the asking price. The rest of this stuff? It's like someone took a book you loved, sold you a fancy new edition, and stapled their own bad fan fiction to the back of it.

Each chapter stars a different set of characters leading up to the final one where they all get together and fight The Big Bad Guys. Some are new, some are returning heroes from the original game, all are boring. Nothing unexpected happens with them. Kain still betrays people and tries to kill Cecil. Palom and Porom (who is now a skinny pink haired anime big sister cliche) are still brats, even though they're in their 30's. Rydia has less personality than ever. 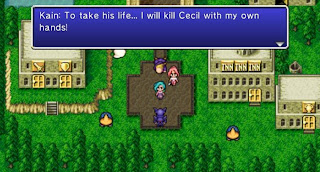 The most important new character is Ceodore, Cecil and Rosa's son. The game opens with him going on a mission with the Red Wings, because that's how FFIV starts. Soon, we learn the truth: The kingdom of Baron is being controlled by monsters and its king (Cecil) is being controlled by them! Why? Because it happens in FFIV. A mysterious threat emerges from the moon, because it happened in FFIV, in the form of the well-named Mysterious Girl. Ceodore fights to learn the truth behind these events with the aid of Hooded Man. I'm not making this up. The other new characters are Yang's daughter Ursula, Harley, Edward's sexy secretary who, of course, secretly loves him, and a whole band of idiot ninjas that travel with Edge.

What else happens because it happens in the original FFIV? Baron starts stealing the crystals again. Kain kidnaps Rosa again. A female companion falls ills of desert fever in Kaipo and you need to get a sand ruby from the Antlion to cure her (and in the process you must cross the waterway dungeon between Kaipo and Damcyan THREE TIMES. Twice using only Edward. I think the game is trolling the player here). Leviathan attacks your ship and swallows some characters. You replay mostly the same dungeons and fight palette-swapped bosses from the original game.

There's some crap about a second moon appearing, the summoned monsters being controlled by Mysterious Girl, and the true identity of the Hooded Man. The second moon starts falling to earth because people liked it when Meteor did that in FFVII. Golbez returns. I never finished the game, nor do I plan to. The story's horrible; everything that's not an explicit rehash is just plain bad, and I feel comfortable saying it's the worst writing to appear in a Final Fantasy game.

So there's that. The story's awful, the characters are dull. How's the gameplay? The main addition to the battle system are Chrono Trigger style combo attacks that you discover by using your Band command in battle and then selecting multiple attacks and hoping it causes you to discover a combo that does something. Or, you look them up on GameFAQs and save the tedium.

The other change is that the phase of the moon (it changes every 15 minutes or so, or if your dudes go to sleep) determines which attacks are useless and which do double damage. Physical moves, black magic, white magic, and thrown items vary in strength based on this. It's interesting in concept, but the way the game's designed you're pretty much dead if you fight a boss who's immune to magic during a moon phase where physical attacks are useless. Instead of working to find a way to overcome this (the way to overcome this is grinding for level ups, which this game loves and encourages) you're better off using a Tent or just idling until the phase shifts.

For the most part I love the original Final Fantasy IV. You know what I hated, though? The underground waterway and the Sealed Cave. Between After Years and Interlude, I was asked to replay both, over and over again. That pretty much sapped any energy I could have put towards finishing this game.

The stark lark of original content, the poor writing, and the weird balance make this game a huge waste of time. I still heartily recommend the Complete Collection, because it's probably the best version of classic FFIV out there right now. Feel free to ignore the two extra games that come with it.
Posted by surlaw at 5:20 PM