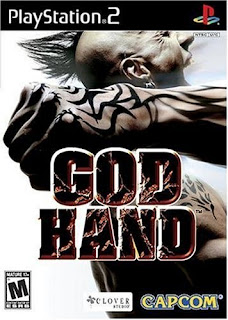 A few months ago, Sony announced that they'd be re-releasing a series of classic (and some not so classic) PS2 games in downloadable format via PSN. As long as the games chosen were good, this would be a great deal for those of us without backwards compatible PS3's, those that no longer have a PS2, or just people who would rather not deal with tracking down used copies of old games on the secondary market. To my complete surprise and joy, one of the games announced for the first pack of releases was Clover Studios' God Hand. I happily bought it, anxious to see how well it's held up over the years.

I first played this game in 2006 in its original format. I didn't know anything going in aside from it being made by Clover, being notoriously hard, and it getting pretty much dumped by Capcom and ignored by consumers to the point that I was able to pick up a new copy almost immediately after release for $20. This was the final game Clover released, and is one of director Shinji Mikami's best titles. While it has gained a reputation as a cult classic since then, it's a shame that upon release such an excellent game was basically thrown away.

At its core, the game is a third person, over the shoulder beat-em-up, a 3D modernization of a style made popular in Final Fight and Streets of Rage, among others. Like those games, God Hand features flamboyant bosses, pipes you can whack enemies with, and crates you can bust open to eat food out of. It embraces old school game philosophy and the inherent silliness that comes with that while bringing the genre into the modern age gracefully. Even the story feels appropriately old school; you're Gene, gifted/cursed with a Super Strong Arm, and you're being pursued by demons. Punch them all out, and then punch Satan in the face. 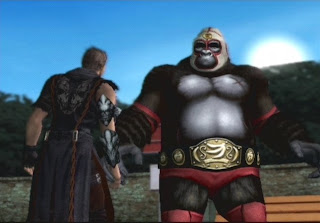 God Hand is known for being unreasonably difficult, but I think its reputation is unfounded. It's a hard game, no doubt, and it's not for everyone, but I find its difficulty completely fair and the vast majority of the times that I'd die felt like my own fault, not the game sucker punching me with a cheap shot. You can equip a huge variety of punches and kicks to the controller's face buttons, dodge with the right analog stick, and unleash super moves once you've built up a meter. The core gameplay is simple and the controls are easy to grasp; you're always fighting the enemy, not the controller. Watching enemy tics and patterns and dodging intelligently is the key to success, and as long as you take it slow the game's challenge is reasonable.

This game's learning curve is one of the best parts of it. By the time you're done playing it, you can start over and plow through challenges that once seemed ridiculous with no trouble. As you learn the game's mechanics they become second nature, and that first demon that killed you five times in the first stage will now feel like a joke. Enemies become stronger based on how well you play, which is a perfect way to keep things interesting even after you've mastered the basics. Learning when to use a guard breaking punch, when to sweep, and when you just go nuts and hammer the punch button is gratifying in a way that no other beat-em-up is.

So, the gameplay's great. I love it. That's not all God Hand has going for it, though! It's also extremely, genuinely funny. Very few modern games attempt to be comedies, and a lot of the ones that do tend to fall flat. God Hand is funny from the first mid-bosses you meet (The incredible Mr. Gold and Mr. Silver) to the amazing/terribly sung end credits song. A few jokes fall flat (The "What did the five fingers say to the face?" reference in particular. The random thugs that attack you yelling Mike Tyson quotes are a lot more fitting) but for the most part the team nails it.

The bosses in this game are fantastic, both from a design perspective and a comedy one. You've got a gorilla luchador, an 80's hair band rocker, a 70's pimp with a beautiful slap, and a team of tiny Power Rangers. Best of all, you've got Elvis, an over-weight macho man with the best battle music I've ever heard. Not all bosses are homeruns (The trio of thugs that are recurring villains are boring, the samurai guys are pretty bad), but enough of them are that almost every encounter is entertaining. 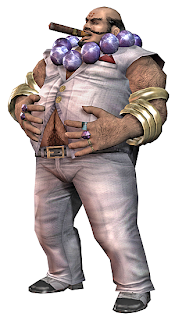 All that said, the game's not perfect. A couple areas towards the end feel dull compared to earlier ones. The minigames, including the Chihuahua Race and the cannon-based ship battle, are cute but ultimately boring. The main female villain turning into a giant crotch monster was probably not the best idea (Elvis turning into a giant stomach monster IS the best idea). The art design is top notch, but the graphics are pretty flat. Textures are mediocre and the anti-aliasing is terrible, even for a PS2 game. Somehow, the graphics in the cutscenes look even more jagged than in gameplay. However, none of that really affects the gameplay or the humor, which are both so spectacular that it's easy to overlook some of the flaws.


If Clover were still around, I'd wish for a sequel, but that's sadly not to be. Mikami's Vanquish is a kind of spiritual successor, only covering the shooter genre rather than beat-em-ups. I'll be reviewing that one soon. With God Hand now being available on the PSN for $10, there's no reason for any action game fan with a PS3 to not own it.
Posted by surlaw at 5:36 PM