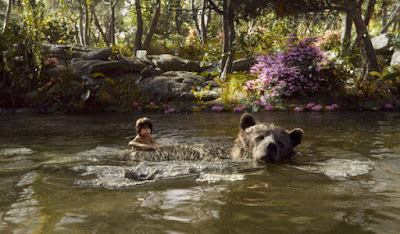 Jon Favreau's Jungle Book: Probably the most average movie I've seen in a long time, though with exceptionally good animation. This is the second Disney talking animals movie featuring Idris Elba in a main role this year, but it's nowhere near the extremely good Zootopia. Average voice acting, a plot designed only to take us from platforming sequence to boss fight to platforming sequence, and one and a half songs.

I liked the portrayal of elephants as almost otherworldly Old Gods, really did not like the amount of exposition stuck in everywhere. Kaa explaining Mowgli's origin story is just really odd and halts the momentum of what should be a trippy, scary scene.


For 20 minutes in the middle, the movie wants to be a musical; it's forgotten after that until the credits. The best singer in the film is Scarlett Johansson and her song gets stuck in the credits instead of the film proper.

It felt like a pretty long hour and a half to me, I was tired by the end. You'll find much better acting and singing in the original version that this is entirely a remake of, rather than a reimagining of Kipling's stories. It's nowhere near the ghoulish awfulness of Tim Burton's live action Alice in Wonderland sequel/remake, but there's nothing that really stands out here, other than the tech on display.
Posted by surlaw at 6:38 PM