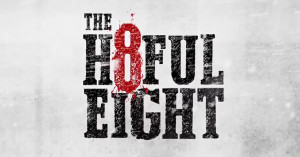 Going to try something new: Before writing longer, more formal reviews, I'm going to post my brief, immediate responses to films I watch. Full review to follow, some day!

What we've got here is an absolute great film that's unbelievably unpleasant to watch. Gorgeous cinematography, very well directed actors, bombastic, discordant music that perfectly sets the tone. Every aspect of the film-making is top notch, while every character is detestable outside of James Parks' O.B., a mostly background character.


It's functionally a remake of Reservoir Dogs: The film is centered entirely around a group of men in a single room scheming and murdering and we've got to figure out who's on whose side and what's going on. Ultimately it doesn't matter, because they're all demons stuck in a frozen purgatory waiting for hell. There's no morally gray lead here to sympathize with; no Django, no Schultz (though Tim Roth plays a bizarro version of him, taking on his look and mannerisms), no Shoshanna, no Beatrix Kiddo. There isn't even a weaselly but endearing Mr. Pink.

What we've got here is basically a rebuttal to Reservoir Dogs while following the same basic structure, complete with using flashbacks to establish who a few of the men stuck in the room are. It strips the film of its "cool factor," taking away the fancy suits and suave demeanor, leaving us with gross, dirty bandits. It takes the romanticized bounty hunter element of Django and shows it as a disgusting abomination with no winners on any side. It's a hopeless, utterly nihilistic film that I won't be able to watch again for a good long while, but it's a work of an expert craftsman. That doesn't mean it's enjoyable.

In spite of that: It's got a lot of good, dumb jokes.

Tarantino narrates a couple of scenes. I don't know why.
Posted by surlaw at 4:27 PM