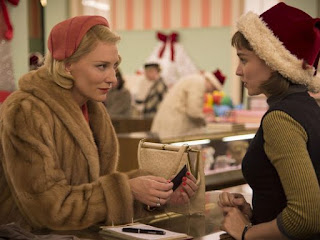 Carol (2015): Great looking film, strong performance by Blanchett. The film is from the point of view of Rooney Mara's Therese (and it's ridiculous that she got a Best Supporting Actress Oscar nomination when this is almost entirely her story) as she falls in love with Blanchett's Carol, a woman in the midst of a messy divorce.

In many ways it's structured like a very old school Hollywood romance while playing with gender roles; the strong and assertive Carol plays a role much akin to classical Handsome Suave Male roles while the star-struck Therese mostly stares at her in wonder while functioning in large part as a blank slate character. Her other love is photography, but the only person to show a great interest in this passion is a minor male character with which there's certainly no romantic bond.


The slow, leisurely pace of the film is another throwback, along with the fashion and soundtrack of the era in which the film's set.

It didn't deserve an R rating.
Posted by surlaw at 7:20 PM