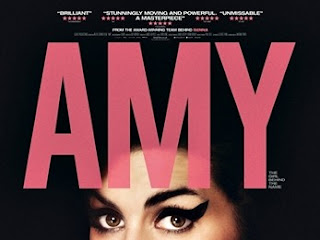 Asif Kapadia's 2015 documentary of Amy Winehouse covers roughly ten years of the singer's life, from her teenage dreams of being a jazz singer to her monumental success to her cyclical abuse of drugs and alcohol. A collage of home footage, concert video, and new and old interviews with those who knew her best, Amy is a commentary on our relationship with celebrity and the relentless monster that is pop entertainment media.


This film functions well as both a documentary and a narrative, and like the best documentaries, doesn't require you to be intimately familiar with the subject before going in. As a Winehouse fan, I was able to find added value in some of the lovely clips included, both personal and professional, but even with no knowledge of her work, Kapadia's film tells a strong, cautionary tale of neglect (both familial and occupational) and despair.

Amy does not sugarcoat the singer's failings and treats her as a real, flawed, yet brilliant human being stuck inside of a diseased system.