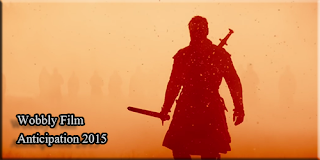 2015 is more than half over and it's been a solid year in film so far. P. T. Anderson's adaptation of Inherent Vice opened the year with a wonderful, dreary haze, Furious 7 and Mad Max: Fury Road set new precedents for action movie insanity, and Alex Garland's directorial debut Ex Machina is an anxious nightmare allegory. Pixar's Inside Out is the most impressive film they've released in years, Jurassic World is a fun, campy horror sequel that doesn't surpass the original but was hugely entertaining nonetheless. My biggest let down was Brad Bird's Tomorrowland, a tonally confusing mess that marks the first time Bird has disappointed me.

That's a lot of good movies, and we're only halfway through! Let's take a look at some of my most anticipated films for the remainder of the year.

Super hero reboots are nothing new, and the latest is a new take on Marvel's original family drama, The Fantastic Four. We already had a perfect Fantastic Four film over a decade ago: Pixar's The Incredibles. We also got a couple of mediocre ones from Fox. The latest film doesn't have a particularly amazing trailer, but it does feature some true talent: Featuring a score by the award-winning Philip Glass and starring Whiplash's Miles Teller and Fruitvale Station's Michael B. Jordan, the new film is directed by Chronicle's Josh Trank. Chronicle, an original, found-footage super hero story that mixes Akira and Carrie, is one of the best films in both the found-footage and super hero genres. It's a powerful, well made film, and like Fantastic Four, co-stars the talented Michael B. Jordan. Fantastic Four is Trank's first film since Chronicle, and I can't wait to see what he does with it.

Director Denis Villeneuve made it to the mainstream with two 2013 films, Prisoners and Enemy, both starring Jake Gyllenhaal. His latest, Sicario, is a nightmare look at the War on Drugs, starring Emily Blunt, Benicio del Toro, and Josh Brolin. Roger Deakins, the amazing cinematographer behind many of the Coen Brothers films and the gorgeous Bond film Skyfall (among dozens of others) rejoins Villeneuve after working with him previously on Prisoners. The trailer alone shows some fantastic looking shots; this is going to be a beautiful, grotesque movie.

Starring Michael Fassbender and Marion Cotillard, Kurzel's Macbeth is at once a traditional take on the Shakespeare classic strikingly visually unique. While I haven't seen any of Kurzel's other films, this trailer intense, attractive, and bombastic in all the right ways. From comedy to super hero action to sci-fi to more grounded dramas, I've loved Fassbender in everything I've seen him do, and can't wait to see his take on Scotland's cursed king. Sadly, its North American release date is as of yet unknown. And weirdly, Kurzel is now working on an Assassin's Creed film starring the same lead actors.

When it was first announced, I didn't have much interest in a film about Steve Jobs. Nothing interested me with 2013's Ashton Kutcher led Jobs film, so I didn't pay much attention to this one until the first trailer hit and I looked at the talent involved. Written by Aaron Sorkin and directed by Danny Boyle, Steve Jobs is another Michael Fassbender led film. This one looks to be a more critical take on the man's legacy, which is unsurprising given Sorkin's work on The Social Network, another film that pleasantly surprised me. Boyle's had some misses, but for the most part he's a strong director and, again, I'm a huge Fassbender fan. This film focuses on three product launches at different, pivotal moments in Jobs' life.


My biggest media disappointment of 2015 is the cancellation of Silent Hills, a PS4 reimagining of Konami's classic horror series helmed by film maker Guillermo del Toro and game designer Hideo Kojima of Metal Gear fame. P.T., a playable teaser for this title, was a free game released last year that focused on the horror of madness via repetition and darkness, and was a cool social experiment on top of that, as people around the world worked together to figure out how to solve its final puzzle. Silent Hills may be gone, but del Toro does still have one crazy looking piece of horror coming out this year. Crimson Peak is a Victorian ghost story which, if his work on the Hellboy films and Pan's Labyrinth is any indication, will feature some wonderfully spooky looking demons.

When Sam Mendes teamed up with Roger Deakins for 2012's Skyfall, he created my all time favorite James Bond film. In spite of their shared hero, it's hard to compare Bond films across the decades, as they vary so greatly in tone and intention. Still, I love Skyfall, and it's both the best the series has looked and felt in decades. Deakins is not back for the new film, but Mendes remains in charge, with Hoyte Van Hoytema taking over for cinematography. Most recently known for his work on Intersellar, Her, and Tinker Tailor Soldier Spy, Hoytema is a visual force of his own, and this will likely be a very pretty film. This time around, the villain is played by the always wonderful Christoph Waltz.

I'm a big fan of the Hunger Games films, even if I've liked each one less than the last. They're simple action/adventure/romance movies at their core, but star such a spectacular cast and express themselves so earnestly that they rise far above the typical young adult novel adaptation. Right now, I think these are the best serialized films currently being made, and I'm excited to see how it all ends, even if I'm sure I'll be disappointed when Katniss doesn't get an eye patch and form her own nation of soldiers to fight off both The Capital and The Rebels.


It's amazing that almost 40 years after the original, we're still getting Rocky films. It's even more amazing that the last one, 2006's Rocky Balboa, was actually really good, and that the latest, a spinoff starring Michael B. Jordan as Apollo Creed's son. Creed reunites Jordan with Fruitvale Station director Ryan Coogler, and is the director's second film. The trailer looks and sounds great, with a soundtrack featuring the best song off of Lupe Fiasco's most recent album, Tetsuo & Youth. This film features Sylvester Stallone's Rocky in a mentor role to the young Adonis Creed. Stallone also produces the film.


While I haven't loved all of Pixar's films, Inside Out was so good that I'm able to get hyped about whatever the studio tries next. That happens to be The Good Dinosaur, directed by Peter Sohn after Up's director Bob Peterson left the project. The Good Dinosaur's had a bit of a rough development history, but then again, so did Inside Out. It's a little weird seeing amazing, photo-realistic environments being trampled by an outlandishly cartoony dinosaur, but I've got faith in Pixar to make it work.


I'm a big fan of J.J. Abrams' two Star Trek films, but their energy and action always felt more Star Wars to me. When he announced that he was directing Star Wars Episode 7, I was immediately hyped, even if I'm a little sad he won't be handling a third Trek film (Justin Lin of the Fast and the Furious franchise has taken over the film instead, and I'm happy with that choice. And Simon Pegg's writing it!) I don't have anywhere near the animosity that some Star Wars fans have for George Lucas's prequel trilogy, but I am happy to see Abrams' focusing on more practical effects and a more lived-in feel for the new film. This is the film I'm easily the most excited for in 2015, even if I'm worried about the multitude of spinoffs Disney keeps announcing. It's also kind of funny that we'll get to see Oscar Isaac and Domhnall Gleeson fighting it out again after their rivalry in Ex Machina.


Following Silver Linings Playbook and American Hustle, Joy is David O. Russel's third Jennifer Lawrence / Bradley Cooper team up film. Both of those films, as well as this one, look to follow the same formula: A mostly thin story guided by a phenomenal cast of actors who manage to take a loose plot and bring it to life with vivid performances. Joy's the story of the life and times of Joy Mangano, the inventor of The Miracle Mop. That doesn't really matter; what matters is that Lawrence is likely to give another fantastic performance that I'll love watching.


Iñárritu's Birdman was one of my favorite films of 2014, and Leonardo DiCaprio's insane performance in The Wolf of Wall Street was my favorite performance of 2013. The Revenant brings them together in a stark, frightening survival film set in the American wilderness in the early 1800's. It looks to be a brutal combination of horror and western, and I look forward to seeing more about it soon. A wider release won't be until January 8th, but given its star and Birdman's success, I expect it will be released pretty much everywhere.

News on Tarantino's latest film, aside from its cast and basic premise, has been mostly scarce following some drama over a leaked version of the script. I haven't been following it very closely, but that barely seems important at this point; Tarantino's previous film, Django Unchained, easily ranks among his best films, and I'm happy to see him continuing on with another western. Here's looking forward to the first official trailer!

If you've got any films you're particularly looking forward to, be sure to share them! I'm always up for discovering new stuff, and a dozen or so movies to look forward to probably isn't enough for me.
Posted by surlaw at 12:49 AM