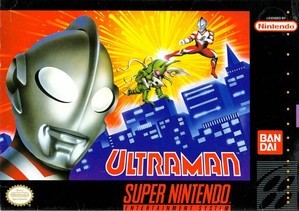 The early 90's saw the birth of the modern 2D fighter with Capcom's Street Fighter II, released in arcades in March of 1991. As the numeral in its title suggests, Street Fighter II wasn't the first fighter, but it was the first to really make a huge cultural impact and, most importantly, actually be a great game. With a colorful cast of characters, a variety of special moves that made mind games and spacing critical to victory, and a fantastic soundtrack, Street Fighter II spawned a legacy like few games do. If you want to see just what made Street Fighter II so impressive, look at the competition; while there were plenty of other good 2D fighters, there was a flood of terrible junk that followed in SF2's wake. From Shaq Fu to Rise of the Robots to Clayfighter to War Gods, there were some absolutely awful fighters in the 90's. Among the very worst is Bandai's Ultraman: Towards the Future. 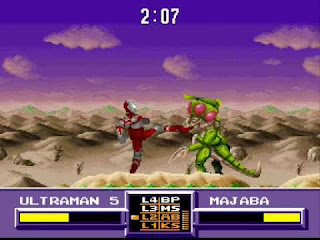 With its debut in 1991, Ultraman was the first SNES fighting game released, hitting the console after Street Fighter II made it big in arcades but before it would be released on home systems in 1992. The game is based on the Ultraman series, a multimedia franchise dating back to the mid 1960's. Ultraman: Towards the Future is based on a 1990 version of the show bearing the same name, a 13 episode series co-produced by Australian and Japanese studios. The game was marketed heavily, along with a toy line based on this edition of the show. It had everything I wanted as a kid; giant robots, ugly monsters stepping on cities, goofy transformation scenes, and Australian accents. I liked the show and I was excited for the game, but when I finally played it, it was bad enough that I'm surprised it didn't scare me off of 2D fighters forever. 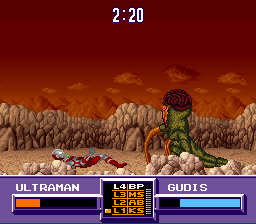 The story so far: Aliens have invaded Earth and it's up to Ultraman to grow really huge in order to punch their necks. Unfortunately, Earth's atmosphere is so polluted (it's an early 90's production, after all) that he can only remain in Crazy Huge mode for a couple minutes. Players have to defeat each opponent within the allotted time and enemy health continually regenerates. If that wasn't obnoxious enough, the only way to defeat an enemy is to deplete their life bar and then perform an energy blast that consumes a slowly growing meter. If the enemy's life regenerates even a tiny bit before the blast hits, it survives and you've got to spend another minute waiting for your gauge to refill, at which point you'll almost definitely run out of time or health. You can try different difficulty levels, but they all seem pretty equal to me, and the only way to get to the options menu is to press Start and Select simultaneously on the title screen.

The B and A buttons do standard punches and kicks, but every attack has noticeable lag and there's absolutely nothing resembling a combo system. You jump by pressing X and perform special moves by pressing Y. You determine which move to use not by performing different input motions as in most fighters, but by using the L and R buttons to cycle through your beams. Of course, since you'll want to save meter to perform your finishing blow, you'll almost never use special attacks anyway. Up plus Y is the only way to defend against attacks; it creates a shield that lasts a very short time and drains your meter. Everything from fighting to simply walking is sluggish, laggy, and ugly.

The single player experience is terrible, but I only really care about multiplayer in fighting games anyway. Surprisingly, this game doesn't even have a multiplayer mode, so all you can do it fall over and die alone, over and over again. 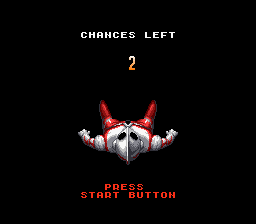 I've never made it very far in this game. Frankly, there's really no reason to want to. It's miserable to play, the controls and fighting system make it far more difficult than it has any right to be, and worst of all, there's no multiplayer. Shaq Fu and Clayfighter are pretty terrible fighting games, but at least they're entertaining to play with a buddy and laugh at. Ultraman: Towards the Future doesn't even offer that. It's a lonely, awful experience, and is by a pretty wide margin the worst 2D fighter I've played. It's interesting to check out for the historical curiosity of just how bad a mainstream fighting game can get, but it's not worth the $5 it currently goes for on Amazon.
Posted by surlaw at 6:05 PM