On your first token, Carnival plays like a cutesy Space Invaders – but this fixed-shooter arcade game from Sega/Gremlin is really about manipulating bonuses to complete the stage and gain points.

In this 1980 game, you're moving left and right on a fixed track at the bottom of the screen to shoot at colorful bears, ducks and rabbits with a limited amount of ammo. The targets systematically move across the screen in three rows, moving to a lower row after they exit the screen. But unlike Space Invaders, your targets aren't all visible at all times, and they don't descend lower than the third row. With one exception, that is: the ducks.

As an added threat to your diminishing ammo supply, the ducks can spontaneously come to life, swooping down to the bottom of the screen to gobble up your bullets if you don't shoot them in time. So the first key to Carnival is keeping your eye out for these descending quackers. 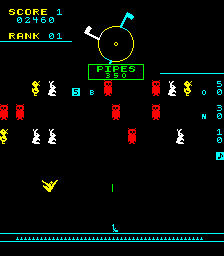 Beyond that, your next priority is acquiring bonus points and ammo—you can take care of the easy targets along the way. The letters B-O-N-U-S are littered among the targets on your screen once per stage, and you have to hit them, in order, to gain extra points. Small targets marked "5" and "10" also give you extra ammo.

You may not notice, at first, a box appearing in the upper left corner with changing numbers. This box switches between displaying positive and negative point values and bullets, and shooting the box will harm or hurt you accordingly. The bonus points and ammo disappear quickly, so keeping an eye on this corner is key to your success.

Finally, you'll notice colored flags ("pipes," according to the game) rotating clockwise at the top of the screen. Bonus points are awarded when you hit two of the same color in a row, so leave these for last, time carefully and this is simple. When you've completed the stage, you have a bonus round (which, according to multiple online sources, makes Carnival the first arcade game with one) in which you shoot a bear with a target on its belly as he runs left and right until he escapes the screen. Each hit gets you extra points. When the bear's gone, you're on to the next stage – same idea, but with less ammo to begin with and more swooping ducks.


The game is fun because it's very straightforward and systematic while employing timing skills. It's more easily accessible than some shooters because you can take a breather – if there's no duck coming down, you're not in imminent danger. Still, after a bunch of plays I've only made it to the second stage, so it's no walk in the park, either. The question remains: Will my prize at the end be a live duck?
Posted by surlaw at 9:02 PM