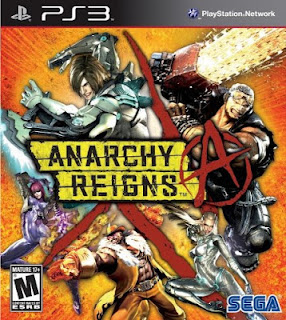 Platinum Games' Anarchy Reigns (Max Anarchy in Japan) is a game with a lot of interesting and frustrating backstory around its production. It is a semi-sequel to 2009's MadWorld, featuring several returning characters including its main character, Jack Cayman. I didn't enjoy MadWorld at all; its gameplay got repetitive before I was finished with the first stage, its running commentary got repetitive in half that time, and I found its fixation on gory kills both gross and embarrassing. I wasn't expecting much from a follow-up, but Platinum smartly made Anarchy Reigns a sequel in spirit only, taking the elements of MadWorld that did work (its soundtrack for instance) and removing everything that didn't. Instead of a dull single player game, Anarchy Reigns is a multiplayer brawler that feels like a mix of Power Stone and a simplified God Hand.

A demo was released on the Japanese Playstation store in May 2012, with a worldwide release of the game scheduled for July. I wasn't expecting much from a follow-up to a game I didn't enjoy, but was pleasantly surprised. The graphics weren't great, but they were vibrant and fun, and the online mode seemed solid. I was looking forward to its US release, but July came and went with nothing. The game's US worldwide release would be shifted repeatedly by publisher Sega, in spite of the Japanese version including an English mode.

It wasn't until January 2013 that Anarchy Reigns finally got a US release, and I'm pleased with the game, but completely displeased with the way Sega handled it. This is a game whose main selling point is its online play, and because Sega didn't even attempt to promote it, the online community has been pretty weak. I've still been able to get into games, but sometimes it isn't easy to do so. I appreciated them releasing this game at a reduced price point of $30, but aside from my own preordered copy and one other copy that my local Gamestop received, I haven't even seen any copies of it in stores. It's a niche title that stores won't be too interested in putting on their shelves, so why not have a digital version to go along with the physical release?

On top of that, Sega made two modes Gamestop preorder exclusive, which means I've literally never been able to find enough players to play those modes with. The character Bayonetta, from the game of the same name, was also locked as preorder DLC, and is not available to buy otherwise at this moment. Bayonetta was Platinum's most successful game thus far; use that as a selling point! Put her on the box, advertise the fact that she's a guest character. It helped SoulCalibur sales, why not give it a shot here? She's already in the game, use that to get people to try it. Suffice it to say, Sega botched the release of this game pretty heavily.

My problems with Sega's ineptitude as a publisher for this game could go on for more paragraphs, but I've made my point. So in spite of all that, how's the game itself? 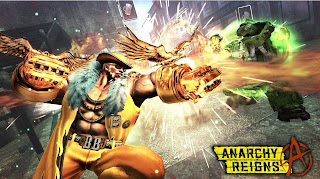 Anarchy Reigns, while still violent and at times repetitive, fixes all of my problems with MadWorld. It has more responsive controls, a more pleasant camera, a great (though underpopulated) online mode to break up the tedium of single player brawling, and a better (though still pretty dumb) sense of humor. Its violence feels cartoony and not gross like MadWorld's. The mostly hip hop soundtrack from MadWorld, which was probably that game's best feature, is even better here, using several of the same artists as well as a handful of new ones, including a fun, nerdy track by Dilated Peoples.

The core mechanics of the game are simple. One button performs light attacks, one strong, one grabs, and holding L2 turns your attacks into huge Killer Weapon moves that drain a meter you build by taking and doing damage. There are a lot of combos for each of the game's 18 playable characters, but it's not as complex as Bayonetta or a Devil May Cry game. The simplified combat works well online, since things get so chaotic in 16 player matches that you rarely have time to pull off lengthy combos. In the single player campaign, the combat against minor enemies gets repetitive pretty fast. Single player boss fights, on the other hand, are pretty fun.


Gameplay takes place in large, open arenas. In single player mode, scoring enough points unlocks up to six missions per chapter, with four chapters total and one final chapter consisting of a couple of fun boss fights. If you kill 100 enemies per chapter in the hub worlds, you unlock new skills for multiplayer, some of which make your character much stronger. While I enjoyed most of the missions (I loved the event battles with a giant kraken) it is too much of a grind to unlock them all, and the worst part is that you have to play through each chapter twice.

This game is surprisingly story-heavy, with long, nice looking cutscenes interrupted by ugly talking head dialogue scenes that stink of a developer running out of time or money. The story isn't particularly good, but its characters are for the most part fun. Blacker Baron and Mathilda are a great pair, and I loved Edgar Oinkie's pig puns and Big Bull's cow puns. There's lots of swearing that feels very forced, and only a couple of the actors are really able to pull it off. Steven Blum as Jack in particular can't really pull off the hardcore badass role Jack was written as. Maybe it's better this way. Some jokes are really stupid and there are too many internet meme shoutouts, though they're mostly contained to the game's trophy list. Still, having a character scream "OVER NINE THOUSAND" made me frown. It should also be noted that the game's cutscenes are both unskippable and unpausable your first time through. 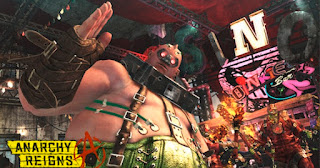 Character designs are a bit all over the map, ranging from Saturday morning cartoon heroes and monsters to modern anime designs to bondage queens. It works for the most part, and everyone certainly has their own personality, but it's hard to say this game has a coherent art style. Some characters play a bit too similarly, but for the most part there's a decent amount of difference that goes beyond speed and strength.

For the single player campaign, you can choose to play as the chainsaw-armed Jack Cayman or as the cybernetically enhanced policeman Leo Victorion. Once you finish four chapters as your first pick, you'll replay those chapters again as the other, albeit with different missions. You're still grinding for points in mostly the same environments, and some missions definitely feel like repeats. After this, you play the final chapter as the character you started as, in a chapter called Red Side. If you play as Jack and want to see Leo's Red Side, well, you have to do it all again, picking him as your starter this time. Seeing all of the game's single player content therefore takes playing through its four chapters four times each.

The difficulty level in the single player campaign is kind of strange to me. There's an easy mode which is almost stupidly easy, and that's fine. Normal mode also felt way too easy to me, though. After beating normal, I tried hard mode and while the regular enemies simply had more life and did more damage, the bosses become so much more aggressive that it feels like a new game. The jump in difficulty between normal and hard is huge, since I made it through one with no effort and am still struggling through the other. It really feels like normal should be harder than it is, to more properly prepare you for harder challenges. 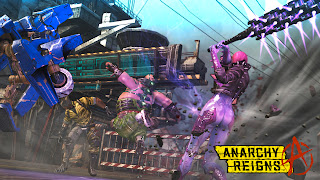 Once you go online you'll find a pretty huge number of modes to choose from, in both Ranked and Player Match modes. I have no idea why there are two categories; the skill level of players seems the same in both and all of your options are the same. Since so many people fight at once, there's no matching by skill level. With all of this, separating players into these two categories just seems like a terrible idea, especially since this is not a game that was bound for million seller status. It fragments the userbase unnecessarily while providing no benefits.

The variety of online modes is pretty great. You've got 16 player battle royales, 4 on 4 team deathmatches, cooperative survival modes, a fully functional football type mode, and much more. The only mode I haven't enjoyed is the one on one Cage Match mode, since this game really doesn't seem suited to this sort of fight against another human. The fact that so many people can join in in most of the game's modes means that even if there are one or two dominant players, which there always are, you can still have fun with the rest of the crowd even if you're a beginner. In certain modes, disasters will randomly occur that can screw over everyone on the battlefield, such as planes crashing, or one specific player, such as the stage darkening and the highest scoring player being illuminated in order to tell the other 15 people to target this one. They're always fun, whether you're the victim or the one using them to your advantage. My only real beef is that there's no way to mute other players' microphones and most of the players with voice chat I've run into have been pretty annoying.

As a single player game, Anarchy Reigns is definitely worse than Platinum's Bayonetta or Vanquish, but as a multiplayer experience it's a blast. If you're interested in trying it, do so sooner rather than later, since the already small userbase will probably dwindle rapidly. If anyone on PSN wants to throw down, send a friend request to Surlaw.
Posted by surlaw at 11:24 PM