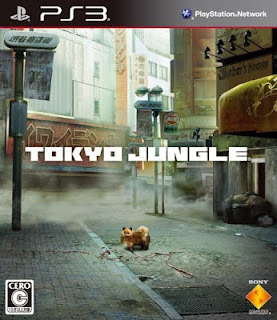 Tokyo Jungle is definitely a premise I can get behind; it asks the question, "What would happen to the world's animals if all of humanity disappeared?" and then throws the player, controlling one of these animals, into a hostile, post-apocalyptic world. Controlling one of more than 50 animals, players survive by hunting prey if they're a carnivore, searching for plants if they're an herbivore, and fighting off rival animal gangs for territory. The objective is to eat, breed, and survive to live another day. It's an arcade style beat em up with an emphasis on getting high scores and has a bizarre sense of humor. Overall, sounds like just my kind of game. Sadly, I think it's terrible.

When the game begins, players can choose between either a Pomeranian dog or a small deer. Unlocking the remaining playable animals requires dozens of hours of completing challenges and grinding for survival points, replaying the Survival Mode over and over again to earn enough credit to buy new species and colors. I'm fully willing to admit that I didn't put a lot of time into this game. I played for about two hours, had a horrible time, and felt no compulsion to give it another shot. You can eventually unlock dinosaurs and robodogs, and while that is funny, the core gameplay is so repetitive, slow, and boring that I can't imagine ever having the patience to do so. Again, it's very much an arcade style score attack game, so if I wasn't having fun after two hours, I was probably never going to have fun. 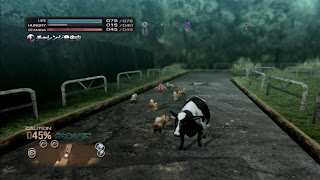 Tokyo Jungle's two modes are Survival and Story. In order to play more chapters of Story you need to grind out time in Survival. Story Mode gives you more specific, short term objectives, while Survival is more of a Rougelike type of deal, with randomly generated enemies, items, and rewards. Level design doesn't change from game to game, and is both visually drab and boring to explore. You can find journal entries about how the world ended as you play, but I really didn't care enough to want to keep tracking them down. In each district of Tokyo, there are a few territory markers to capture. Once you've got them all, females appear for you to mate with and pass on your abilities to the next generation. As you eat, you level up from Rookie to Veteran to Boss; choosy animals will only mate with higher level ones. There are some challenges to clear, but most are pretty standard "kill this thing" "go here" "eat X things" missions that don't inspire much creativity.

I knew the game boiled down to eat/mate/breed, but I still expected it to be more fun. Hunting food boils down to mashing the attack button against weaker enemies, mashing the attack button and occasionally hitting the right stick to dodge for stronger enemies, or using R1 to instant kill prey that hasn't seen you. Combat is extremely shallow and all of my encounters boiled down to either my pack completely ruining an enemy pack or my pack being killed almost instantly. Apparently your Pomeranians can eventually defeat a pack of lions if you're dedicated enough and willing to spend enough time grinding through the game. I was not.

For herbivores, stealth is essential. Players can hide their animal in tiny patches of tall grass that usually obscure your animal entirely, even if it really shouldn't. I can't really give this game a hard time over realism, but it does still seem stupid to be able to evade a pack of Golden Retrievers by standing in a patch of grass less than a foot away from them. There's a countdown on screen that tells you how long you have to wait before the coast is clear.

A big part of this game is getting lucky with what spawns. Once you produce offspring, the game resets the map, adding new food/enemies/items. You must mate in under 15 years or you'll die. If you're lucky, the map will respawn in a reasonable manner. If you're not, you'll spawn with no food in your district or any adjacent one, with an animal too slow and low on HP to make it to an area that DOES have food. If you're especially unlucky, the game will spawn Toxic Clouds in your area, which slowly kill you in addition to poisoning water supplies and any food sitting around. I like challenging games, but this doesn't really feel like a challenge, it feels like winning or losing based on luck of the draw. My best scores weren't earned by me playing smarter, they were earned by me having better animals/items spawn and fewer toxic areas.

Visually, this game is pretty ugly. It looks like cheap and washed out in a way first-party Sony games never do, and any closeups of the animals are really horrible to look at. Its sound effects are passable, but its soundtrack is terrible. There's a constant droning techno beat that both doesn't fit the game at all and isn't exciting to listen to. I would have rather seen total musical silence with a greater emphasis on environmental sound effects as in the jungles of Metal Gear Solid 3, or a more bombastic, cartoony soundtrack in the vein of an actual old school arcade game. Tokyo Jungle's music falls somewhere in the middle of these two options and hits the worst of both worlds. 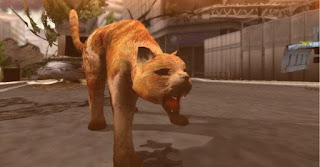 I've heard a lot of praise for this game's sense of humor, and I do think it's funny to put a cat in a basketball jersey as he leads eight kittens in battle against a cow. That's about all there is to it, though. "There are dinosaurs now?!" may be funny, but it's only really funny once, in a "this game is bananas" way that totally doesn't fit its gameplay. Dressing animals in funny outfits is the high point of the game, but that's not enough to get me to say it's worth playing for comedy value alone. It's a dumb, kind of gross game that isn't fun to play at all. I would have gotten more value out of watching brief videos of the sillier things in this game than actually playing it.

I don't feel that Tokyo Jungle is worth the $15 price tag to download it on PSN, and I certainly don't think anyone should blow real money paying for DLC animals that largely handle the same with different stats. For the $60 price tag the Japanese release carried, I'd have been furious. As it stands, I'm let down and bored and wish I'd only paid at most $5. I was hoping for any of the following; an intense arcade experience, a realistic survival simulation, or a spiritual successor to EVO: The Search for Eden. I got none of the above. I honestly can't believe this was ever sold as a full-price title anywhere, and rank it among my worst PSN purchases.
Posted by surlaw at 9:57 PM