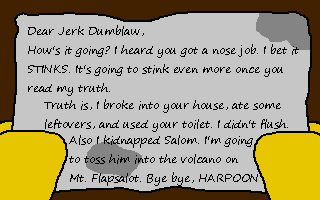 I've been a bit behind on reviews lately, but for a good reason; I've been pumping a lot of my free time into getting Cool Guy Bob Surlaw into some playable form by the end of the week. It will likely be a demo consisting of the introduction, the main town, and the first dungeon, but it will give you a good idea of what's to come. The town's NPCs and graphics details won't be 100% done, but there will be plenty of time for that later. There are about 300 text boxes in the game so far, of which you'll see only about a third per playthrough. Even though the finished game will only be a couple of hours long, those of you that like its dialogue will have plenty of reasons to play it through multiple times!
Posted by surlaw at 1:25 AM