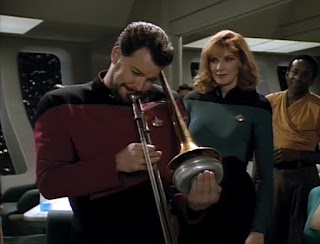 "After an away mission to Alpha Onias III interrupts Commander Riker's birthday party, the first officer suddenly awakens in sick-bay sixteen years in the future where he is the captain of the Enterprise and about to negotiate a peace treaty with the Romulan Star Empire."

Riker and Friends go down to a planet, weird mist appears, Riker gets trapped. When he wakes up, he's in the future! His beard is messier, Picard is an admiral and has a beard of his own, future computers stink, and Data looks weird wearing a red uniform. Dr. Crusher tells him that funky mist gave him a disease that periodically makes all of your memories from after you were misted vanish. Riker is asked to broker a peace treaty with the Romulans.

Obviously something is off, and everything will be set back to normal by the end, but Riker trying to figure out what's going on is entertaining, even if he's a big grouch the whole time. It turns out it's all a simulation/hallucination caused by a lonely alien who just wants Riker to be his dad. I believe this is the only appearance of a Grey in Trek history. After the Future Enterprise simulation fails, he puts Riker through a Captured by Romulans simulation. Once the truth is revealed, Riker forgives him for the deception and takes him on to the Enterprise, where he is never heard from again.

It's kind of dumb that aside from Picard, no one's role has changed. Everyone's still on the same Enterprise doing the same things, and acting exactly the same. It's not a very convincing bit of trickery, even aside from the fact that the alien decides that Minuet, the hologram girl from the Binars episode, should be Riker's future wife. This episode also makes that moment from season 1 sound a lot more significant than it actually was. There are Ferengi and Klingons on board and the Romulans are chill now, but it would have been more fun to see more weird, wrong elements in this simulated world. 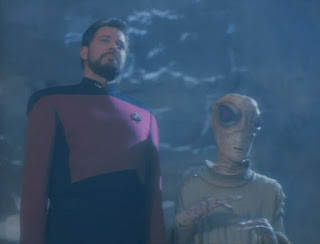 That said, it is a good episode. The alien is completely sympathetic, even if he's not a very good Dungeon Master. Riker proves that he'd be a decent dad; maybe not as good a father as Sisko, but certainly far better than Worf. This episode also brings back Tomalak (in simulated form) and he's always entertaining.
Posted by surlaw at 10:55 PM