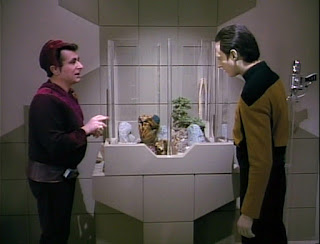 "A trader fakes Data's death to add him to his collection of rare and unique objects."

Data is hijacked by a weasely con man with a love of antique crap, ranging from baseball cards to the Mona Lisa to a dinosaur. He treats Data as property and tries to force him to sit in a chair and wear a dopey purple jumpsuit. He finally convinces Data to do as he says after throwing acid on him and threatening to execute a woman who serves on his ship. Obviously this is a stupid thing to do, and this woman takes Data and tries to escape.


This show features some top notch acting from Brent Spiner, who manages to show a great deal of conflict/calculation in Data's eyes while maintaining a completely blank face. It's yet another episode where you can't help but feel that Data's "I have no emotions" schtick is a load of bull, but that's such a consistent inconsistency that it barely registers as a plot mishap.

This episode has an unfortunate back story, as the actor originally cast in the role of the trader Fajo attempted suicide during production of the episode. His was replaced by Saul Rubinek, who I think does a great job considering he was brought in at the last minute to a show that had already been partially filmed. He would have played a perfect Ferengi, but as it is, he plays a pretty decent weird space gnome guy with some really ugly friends. 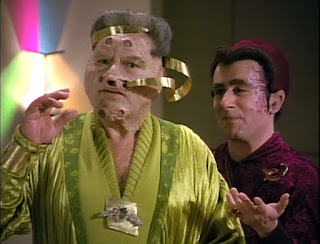 I kind of hoped Data would have kept the dinosaur puppet around as a pet after this episode. I think that's the biggest misstep in this one. Overall, a pretty solid episode that uses scheming and sabotage over Big Science Words. For the most part, anyway.
Posted by surlaw at 10:58 PM