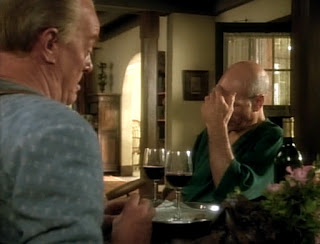 "Captain Picard takes leave on Earth and visits his family while recovering from his assimilation into the Borg. Worf's human parents visit the Enterprise and help him deal with his discommendation."

There are a lot of really strong episodes of Next Gen, but I can say without a doubt that this is my favorite one. It's the perfect follow up to Best of Both Worlds, and must be watched as the conclusive, third act of that story.

This show involves three family plots; Picard, trying to recover from the horror of his Borg assimilation, visiting his parents on Earth, Worf's parents coming on board the Enterprise, and Wesley and Beverly coming to terms with the death of Jack Crusher almost 18 years ago. There's no obnoxious technobabble subplot to drag it down. All three stories are strong, with Picard's being the strongest and most important.

Picard's brother is a grouchy old British man (though we're meant to believe, like Picard, that he's a Frenchman) who has a vocal opposition to the conveniences of Federation life. This is one of the first episodes to really examine the idea that maybe life in the Trek universe isn't all it's cracked up to be. A character discussing the things we lose when we allow technology to make our lives too easy works well following a plot about an entirely technological race trying to take away Picard's humanity. Robert Picard (not to be confused with Robert Picardo) presents his choice of lifestyle in a much more convincing manner than the similar argument we'd see from Eddington on DS9.

The three episode arc starting with Best of Both Worlds Part 1 and ending with Family is the best run of episodes in Next Gen. The writers had to fight just to be able to do this third episode, in spite of how wonderfully written and conceived it was. This episode was written by Ronald Moore, who would perfect serialized Star Trek once he moved on to DS9. Michael Piller, writer of Best of Both Worlds, had this to say about the argument for allowing this episode to be made:

"The normal objections were that we were not serialized. We try to tell stories that can be told in one hour and that's what we do very well. When I got to the end of Part II, we made the decision not to extend it and I called up Rick and said, 'Hey, listen. Next week Picard can be fine, but for a show that prides itself on its realistic approach to storytelling, how can you have a guy who's basically been raped be fine next week? There's a story in a man like Picard who's lost control. Delving into the psychological crisis that a man like that has to face, and what does he have to do? ' Finally, I was persuasive enough to talk Gene and Rick into taking the chance, and I think everyone is glad we did."

From what I can tell, producer Rick Berman really didn't want this episode made, at least not without shoehorning in a sci-fi b-plot. Moore and Piller really dodged a bullet there, as the episode was allowed to stand on the strength of its characters without needing the audience to receive constant reminders about how weird the future is.

I don't necessarily think there should have been an extension of this plot, because it ties up very nicely, but I do wish Next Gen had been allowed to become more serialized from this point forward. Aside from rare moments of continuity, you can still watch the post Best of Both Worlds episodes in pretty much any order, and I think that's a huge missed opportunity. I'd get what I wanted from a serialized Trek in DS9, but I wish Next Gen's cast had been given the opportunity to live and breathe in that kind of stronger, more character driven style. In the end, Next Gen remains episodic, but at least we got an arc of three amazing episodes. It's too bad we never get to see Worf's parents again, his dad's awesome. 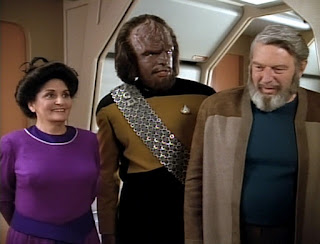