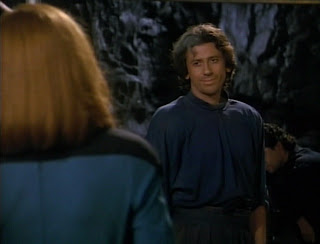 "Doctor Crusher is captured by terrorists who want to involve the Federation in their struggle for freedom."

Star Trek gets a lot of guff for aliens being Foreheads of the Week, but honestly, it's better than normal humans with no distinguishing features. This episode features Humans With Skunk Hair. I'm not sure that's better.

This is the first episode I've run into in my rewatch that I have no memory of. It seems really bizarre to not recognize an episode, because I've watched all of the DVDs previously. That was my first though here; my second was "Wow, this music's bombastic."

The point of this episode is an exploration of the causes of terrorism and the continued justification of terrorists. Both sides are painted poorly and it should be a lot more conflicting but the episode is weighed down by some uneven acting (and the terrorist chief coming off as a turd instead of a charismatic leader) and technobabble about inter-dimensional transporters. Data declares that sometimes, terrorism is good. DS9 would agree. My biggest beef is that I don't think a random alien who has never traveled off-world would have any idea who George Washington was, let alone enough about American history to preach at Dr. Crusher about it.

Also, the police chief has a weird silver hand sitting around in her office. 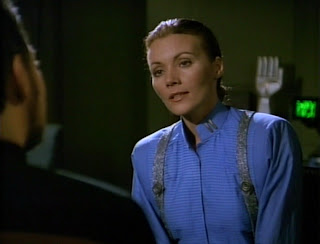