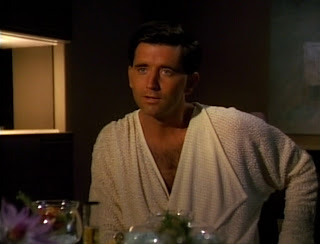 "The Enterprise hosts negotiations for possession of the only known stable wormhole."
Troi wakes up grumpy with a craving for chocolate and finds something even better-- Lloyd Braun. Matt McCoy plays sleazy with a hint of psychotic really well in both this episode and in Seinfeld, and I always love seeing Seinfeld actors pop up on Star Trek, even when they play really horrible roles like whatever that was Jason Alexander was supposed to be in Voyager.

The negotiations for the rights to the wormhole aren't very interesting, but the Ferengi hijinks that surround them are. I'm an unapologetic fan of Ferengi episodes, mostly as a result of DS9, but I even enjoy the Voyager episode that's a direct sequel to this one in spite of it seeming to be pretty widely derided.

What's not so fun is the way not-Lloyd Braun seduces Troi. There is zero chemistry between the actors, and there's no possible way, given the way Marina Sirtis plays it, that Troi should start to fall for this guy. He's creepy, touchy, and egotistical-- The perfect Internet Male. On top of the horrible romance subplot, the BIG REVEAL at the end, that his character is such a good negotiation because of his Empathic Abilities, is awful. It's played up as if he were cheating by using the ability to benefit the people he represents, but, uh, Troi does that to benefit the Federation constantly. She shouldn't be the one to call him out, and honestly, it shouldn't really matter. He calls HER out on her hypocrisy, but we're still clearly meant to side with Troi in the end for absolutely no reason.

Star Trek has a thing for creepy love scenes, and this episode's is no exception. Everyone looks uncomfortable, the atmosphere is unpleasant, and it ultimately ends badly. Speaking of uncomfortable: They probably shouldn't have filmed the "Crusher and Troi in horrible leotards stretch at the camera in a hall full of mirrors" scene. Maybe the episode should have spent more time with the Ferengi instead, add a subplot about them trying to sell Data gold plating or something. 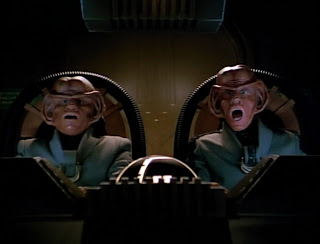