Released in 1987 by LJN, this game was made as a tie-in for the awful film Jaws: The Revenge. LJN is known almost entirely for publishing licensed games like this, most of them widely considered terrible. These are the guys who gave us the horrendously bad X-Men NES game, a series of Spider-Man games than range from unplayable to almost mediocre, and for some reason, an NES version of Pictionary. Almost none of this company's output is worth anything, even if you're a fan of the properties their games are based on. I was a huge Spider-Man fan when LJN released Spider-Man/X-men: Arcade's Revenge in 1992, and that didn't blind me to the fact that it's probably the worst game I own. So with all that said, here's a huge surprise: Their NES Jaws game is actually fun.

I played Jaws a lot with my dad when I was young. I never actually managed to beat the game; he did. I played a lot of NES games that I hated even when I was a kid, and this one? I didn't hate it. Going back to it years later, I expected it to be way worse than I remembered, but while it's not a great game, it is fun.

The game begins with the player controlling a boat from a top down view, sailing freely around a fairly small ocean. Every now and then you will get hit by a random encounter and the game switches to a Gradius-style side-scrolling shooter. These encounters put you in the role of a diver with a harpoon gun. The stages don't auto-scroll, so you can dive at your own leisure. The depth of the stage is based on your proximity to land when the enemies appear. You shoot down stingrays, jellyfish, and sharks for cash money (in the form of conch shells) and eat crabs to become faster. Every now and then, you get a bonus stage where for no real reason you drop bombs on jellyfish from a plane.

The goal of the game is to defeat the Great Shark Jaws, who appears as a fin on the world map every now and then. You can use your shells to sail into ports and buy a Jaws tracker, power up your harpoons, and eventually get a submarine that allows you to survive two hits instead of the normal one. If you die, you lose money and powerups, which is pretty harsh considering how long they can take to build up. When you encounter Jaws on the map, you can bomb him from your ship for a while before he busts it up and you have to take him out with harpoons.

Once you defeat Jaws sideways, the game switches to a first-person perspective and you have to ram him with your ship. I could never do this part. The window in which you can hit him is stupidly small, and if he gets away you have to do it all again. 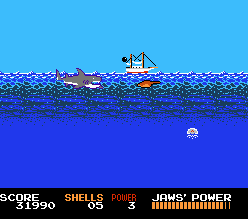 Jaws is a fun game to mess around with. It is too punishing, and Jaws' final encounter is awful, but otherwise it's a relaxed Man vs. Sea experience. The graphics aren't spectacular, but I like how the sharks look. The music is nice, and the song that plays when your Lives Remaining screen displays gets you pumped up for punching sharks in the neck. Your dude is pretty dumb looking.

I should also note that there's a glitch where if you're at the very top of the sea during the side-scroller parts, most enemies will pass through you harmlessly. Abuse this in shark encounters.

This game's no classic, but it's far better than most licensed games of the time. If you pick a random NES game you've never played before, this one's not a bad choice. It's a lot better than the movie, anyway.

I have no idea why the box says "Enteractive Video Games" on it.
Posted by surlaw at 4:35 PM