Donkey Kong's one of my all time favorites and is one of the more universally known arcade games. Along with Ms. Pac-Man/Galaga duo machines, Donkey Kong/Mario Bros. machines are one of the few classic arcade games I still see in random movie theaters and malls. People still like these games and still play them, and somehow, Nintendo still hasn't released an arcade perfect Donkey Kong on a home system. This isn't a Donkey Kong review, though. Not really.

Released in 1981 by Falcon, Crazy Kong looks like a bootleg Donkey Kong hack. Everything is just slightly off; the sound is wrong, the colors are wrong, animation is jittery, and the stages are slightly different. As part of an odd distribution and publishing deal, Nintendo actually granted Falcon permission to release this game in specific territories while restricting the sale of Donkey Kong machines/parts, but plenty of Crazy Kong machines ended up in North America anyway. It's not just a duplicate of the original game's code; Crazy Kong was programmed from the ground up on a different type of hardware than the original game used. 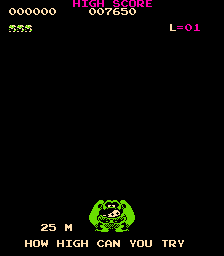 It's also worth noting that there are a few different variations of the game, each with its own title and minor visual differences. Congorilla, Monkey Donkey (the best name), and Crazy Kong Part II are all essentially the same product with a few aesthetic differences. Part II is definitely not a sequel. The unit I've personally played at Funspot in New Hampshire is a Crazy Kong Part II machine. 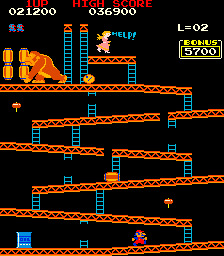 So what's different? Is this worth playing if you've already got your hands full of Donkey Kong?

Stages feel a little different; the screen shot above shows there are now gaps in platforms in the first stage where none existed before. I actually like the additional challenge from this new element, and in spite of being a strange clone, the physics feel spot-on with the original game, so it works. Kong throws fewer barrels here, so the pits make up for that reduction in difficulty and keep things exciting. 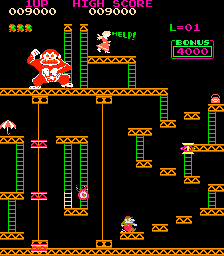 The game's audio and visuals are the biggest change. Crazy Kong Part II, pictured above, looks fine. The stages are recolored, but they're not too garish. Some of the other variants recolor Mario to have green skin or Kong to be yellow and look absolutely awful, in that "this game is overheating and dying" sort of way. The one big visual problem is that Kong's face is entirely redrawn when seen head-on, and looks horrible. I guess he's supposed to look more fearsome? It doesn't work.

The one audio change you'll notice right away is that when you jump, Mario now makes kung fu noises. It's kind of funny to yell HIYA while jumping over a barrel, and it certainly adds to the game's charming oddness. If you can find a machine, give it a play and take a picture of it! It's not different enough from Donkey Kong to be a whole new experience, but you get to feel nice and shady playing it.