Released in 1982, Pengo is a maze game in which the player attempts to squish weird snow monsters by pushing blocks into them or, in a truly harsh act, destroying their eggs before they can hatch. Diamond-shaped blocks can be lined up for huge bonuses in the midst of all the monster squishing. The player controls Pengo, a sassy penguin with an appetite for destruction.


Pengo's one of those arcade games that I always have to play every time I visit Funspot. It's a simple, score based game that relies on twitch reactions, memorizing the placement of the enemy eggs (you see them briefly when a stage begins and then they vanish) and quickly determining the safest paths through the stage. 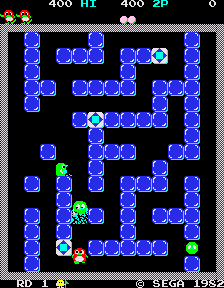 Pengo has extremely generous hit detection (there are times when enemies will nearly pass through you without actually hitting you) unlike many other arcade games of the time. The enemies become faster as you play, but it takes several stages before they become fast enough to overtake you in a straight race. To even the odds, Pengo can slap the walls bordering the stage, briefly stunning any adjacent sno-bees. The ability to see where enemies will spawn from before they arrive gives the player a decent advantage as well. Overall, it's a very fair game and definitely not a "Kill the player as fast as possible, eat more quarters" type.

This game also has really cute intermission cutscenes between every couple of levels. Yes, those penguins are dancing like Space Invaders to celebrate you beating a stage. That's good stuff. The visual style is simple, clean, and pleasant. The music is quite catchy, though I prefer the later version of the game's music to its original soundtrack, which used Popcorn as its "inspiration."

I had never played this game prior to 2010, and as far as I know, there's no decent home version, at least not available in North America. It's one of the better arcade games Sega has made, and it's a shame that it hasn't maintained the same level of popularity as some of their other franchises. Bring him back, Sega! Give Pengo a cameo in the next Yakuza or something. 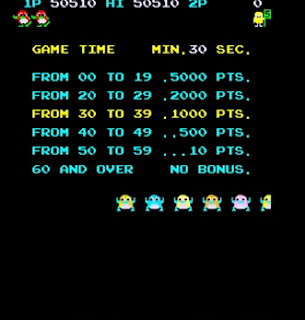 A widescreen, 8-player remake of Pengo was recently released in Japanese arcades using the original graphics. Somehow, there are no announced plans to bring this remake to home consoles, even though it would be a perfect PSN/XBLA download title. Here's hoping it gets ported some day! 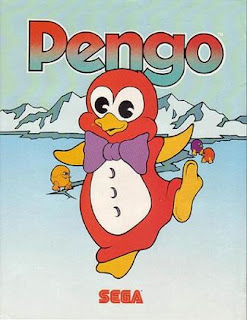