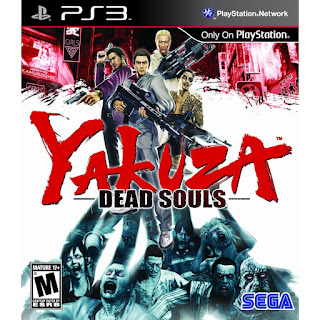 Dead Souls is a spinoff of the Yakuza series starring series hero Kazuma Kiryu and three returning characters, two of which haven't been playable before. The game is a radical departure from previous installments; instead of punching gangsters to teach them to be polite, you're shooting zombies.

Zombie games and movies have become a bit too cliche, but after only a couple of hours of play I've already seen moments in which the game acknowledges this. It has the series' trademark humor and weirdness, so if you liked the previous games for their characters, you should have fun here.

The shooting isn't particularly good. You control your camera with the right stick when walking, but control it with the left stick while aiming. You can auto-aim while running, which makes swarms of enemies go down quickly, but so far this has kind of trivialized the difficulty.

The game is divided between free roaming missions in the quarantined zombie infested areas of downtown Kamurocho and story missions that take you between the quarantine and the healthy, normal parts of the city, where you can still bowl, play with claw machines, and buy crap you'll never need.

There's a new system called Directives, which are mini in-game achievements that are unlocked by performing various feats in combat. Each one earns you experience points and items, so there's more reward here than normal achievements.

I've seen a lot of complaints about this game, especially about its combat, but so far I'm having a lot of fun. The combat is mediocre, but not bad. The characters, world, and humor are still great.
Posted by surlaw at 9:17 AM